Hay farming never ends. Or so it seems. We’re on our fourth/third/second/first cutting depending on which field it is we’re swathing.

And yes, we are doing the swathing. I’m now allowed to drive the swather and actually have to drive it a lot lately. October 1st is here and we have hay to cut, rake, bale, and haul so all hands on deck to get that done before it freezes or rains. 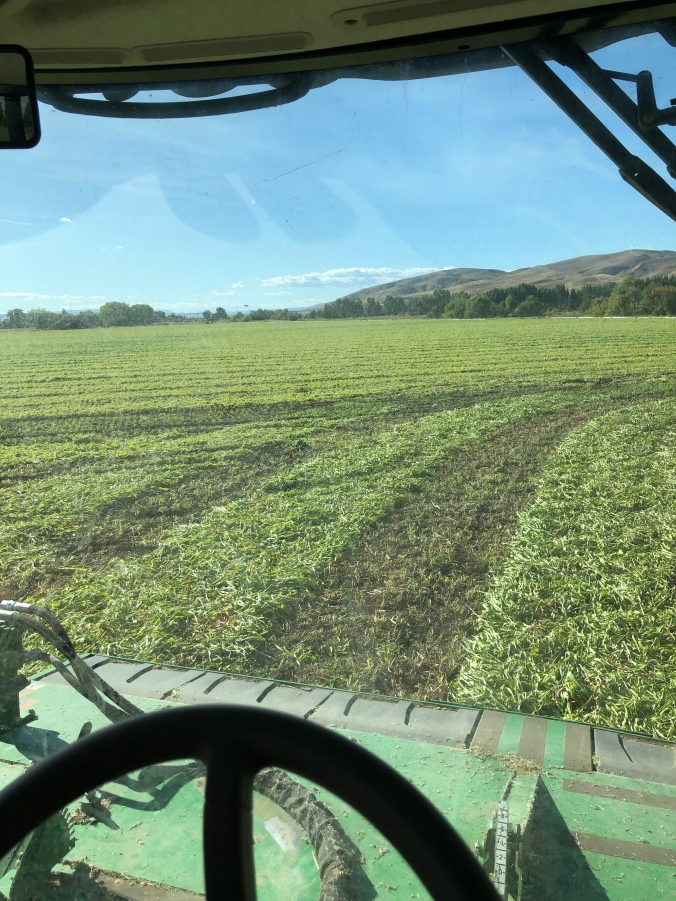 We cut our sorghum and I’m happy to say most of the fields did pretty well for the short growing season they had.

In between frantic tractor driving, the girls and I have been gathering walnuts from our neighbor’s glorious English walnut tree. We’ve shelled two quart’s worth and have another batch in the dehydrator now. It’s amazing how much easier gather walnuts is with a four year old and a two year old. Miss Henley and Miss Becca are champion picker uppers and think it’s a game.

And they can both run the nutcracker. My life gets easier as they grow up. Well, easier in some ways. The arguing and power struggles get worse.

For example, Miss Henley thinks she knows how to sew now. She’s been taking lessons from Ty’s grandma and has made a bag, a doll dress, a skirt, and an apron with Nannie’s help; therefore, she knows how to do it and doesn’t need Mom’s permission.

Or so she tells me. 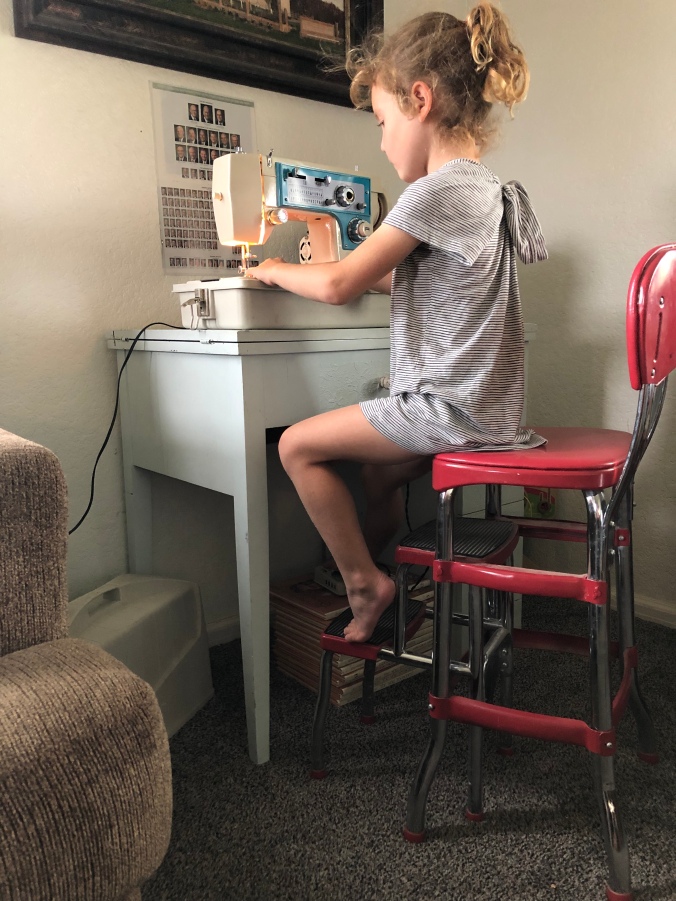 Luckily for me, her sewing machine wouldn’t pick up the bobbin thread and she had no choice but to work on the paper patterns I had for her. Even though I think I know what the problem is with her machine, I don’t think I’ll fix it just yet. Better to have the temperamental machine curb her willful independence than have to quarrel with her myself.

Still, I am very proud of her and her desire to learn and create. It makes me so happy to see Henley discover new things and experience delight in making things with her hands.

Never to be left out of the action, Becca demanded that she sew as well. I put my foot down at her use of the sewing machine and helped her use a blunt needle, yarn, and perforated plastic mat to practice her sewing.

The same day the sewing machine came out, Dad brought home dried field corn for the girls to shell. It’s been fun and messy. As are the chocolate chips smeared across Becca’s face. 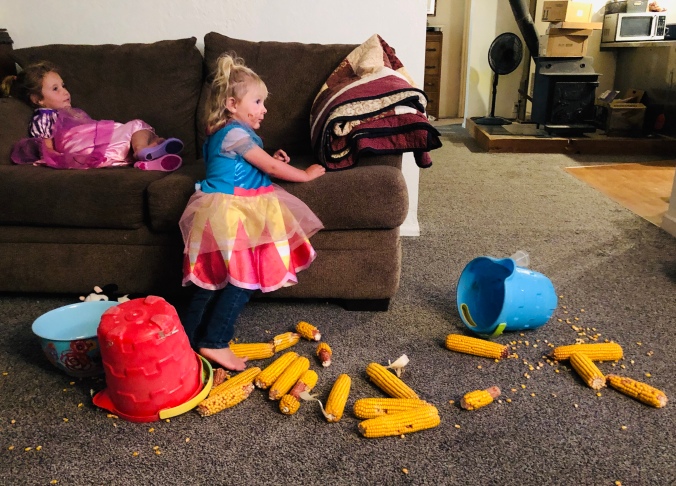 Another day, another field of hay. Raking this time. 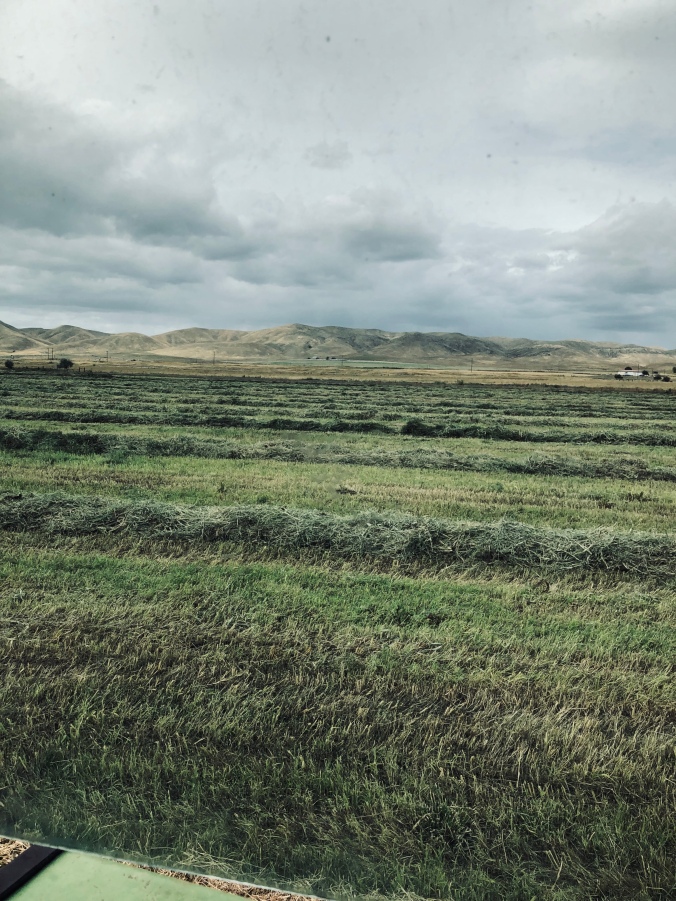 The raking tractor is old and doesn’t have auxiliary hook ups for my podcasts and audiobooks. Drat.

It really was this stormy while I was raking, and since I had nothing else to occupy my mind all I could think was “Gee I hope it doesn’t start pouring just as soon as I’m done raking all this beautiful hay and turn it rotten black.” Thankfully, the wind picked up and blew the rain away. I finished the field and started to head back to the shop, but I must’ve been in a hurry and hit a corrugation that jarred the rake off the hitch and ripped the hydraulic hoses from the tractor and the power cords off the gear box. Thank heavens the gear box didn’t smash the back window of the tractor too. I then had the super fun phone call to let Mr. Rancher know about the damages. He loves me, beyond my skill as a ranch hand, and is short staffed as it is so I didn’t even get a swear-word punctuated lecture when he heard. He just calmly said it wasn’t my fault, the rake attachment was missing a part and could’ve fallen off the hitch at any time.

Phew. I didn’t tell him I was driving faster than I probably should’ve been over corrugations.

Also, Becca received her first quilt from Nannie. As you can see, she was thrilled with it.

Another round of walnuts. Our nutcracker is amazing–it can be used by elders with arthritic hands and by toddlers with hell-bent determinations to. Be. Big! 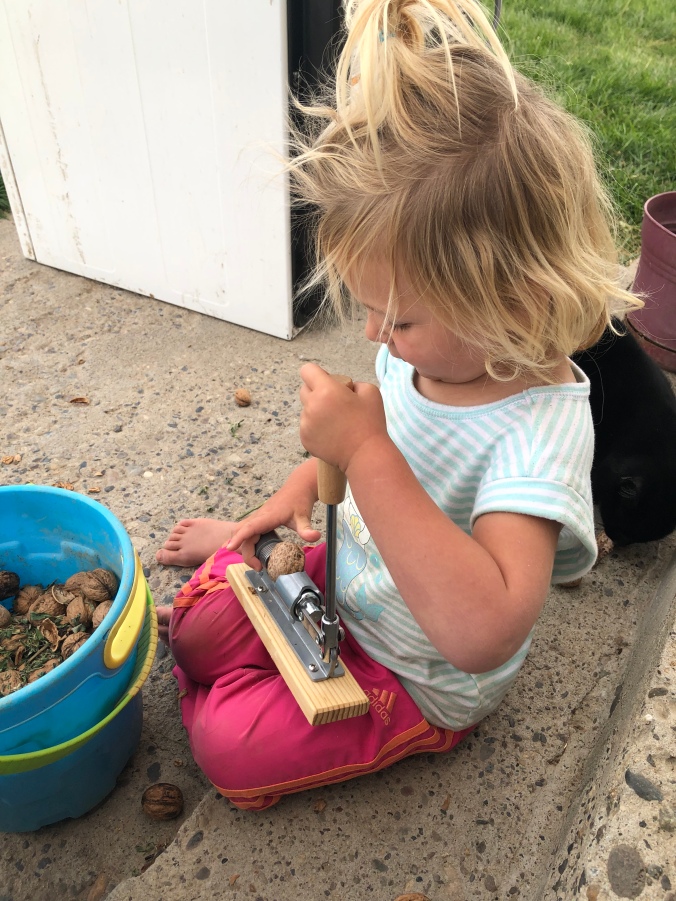 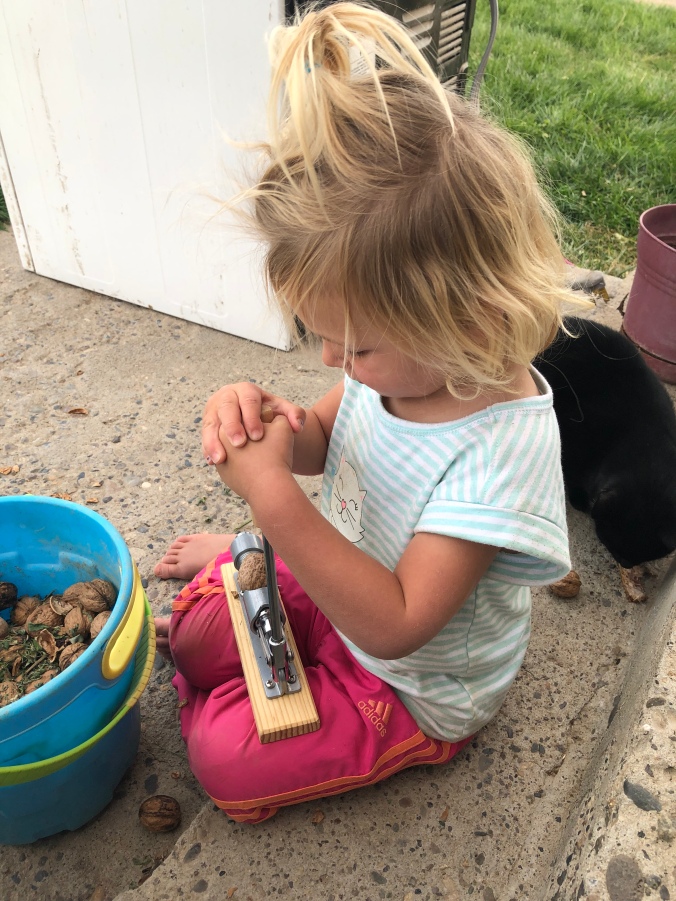 Honestly, I’d rather crack and pick nuts with her than do a cut and paste paper crafts I’m going to throw away after twenty seconds of looking at it. And she’s happy to help me. We get to chat and work together. It’s quaint. And also very real and raw. It’s like a slice out of Little House on the Prairie in the midst of the chaos of the twenty first century and busyness and social media and tantrums and bills and power struggles and stress and finances and work and weather.

I savor these times with my girls as the reason behind all the work Mr. Rancher and I put in towards creating this kind of life. There are easier ways to make money and to live, but how else can we create such deep bonds of family than to actually have to pull together to provide food, shelter, spending money and security for ourselves? Involving our kids in this work gives them a chance to contribute, however small, to the success and joy of our family.

Do we really need to collect walnuts? Are we really that desperate for food? No. We could buy them at the store. We actually don’t use very many walnuts and probably wouldn’t miss them if we didn’t have any in the freezer. But that’s not the point. The point is that they are free, available, delicious, and simple enough for small hands to process for storage. It’s about teaching our kids to use the bounty around them for fun, food, and ringing in the autumn season. And it’s about using what’s around us rather than being so picky and particular that everything we want has to be bought at some kind of store or website. Sure I prefer almonds or cashews to walnuts, but those aren’t growing 1/4 of a mile away, dropping to the ground, free for the taking . So I use walnuts in just about every baked good I can, and my girls remind me to use them! Also, my kids love to eat walnuts, and I don’t think it’s because they taste better to them than other nuts. I think my girls like the walnuts because they relish the experience of finding food themselves and the excitement of cracking open the shell and peeling out edible goodness. It’s like a treasure hunt for them.

I suspect that their wonder and enjoyment will persist if Ty and I continue to encourage them to look around for bounty and opportunity and they continue to have chances to make their own fun while contributing in a meaningful way to our family. It’s a chance for them to act grown up, and what little kid doesn’t want that? 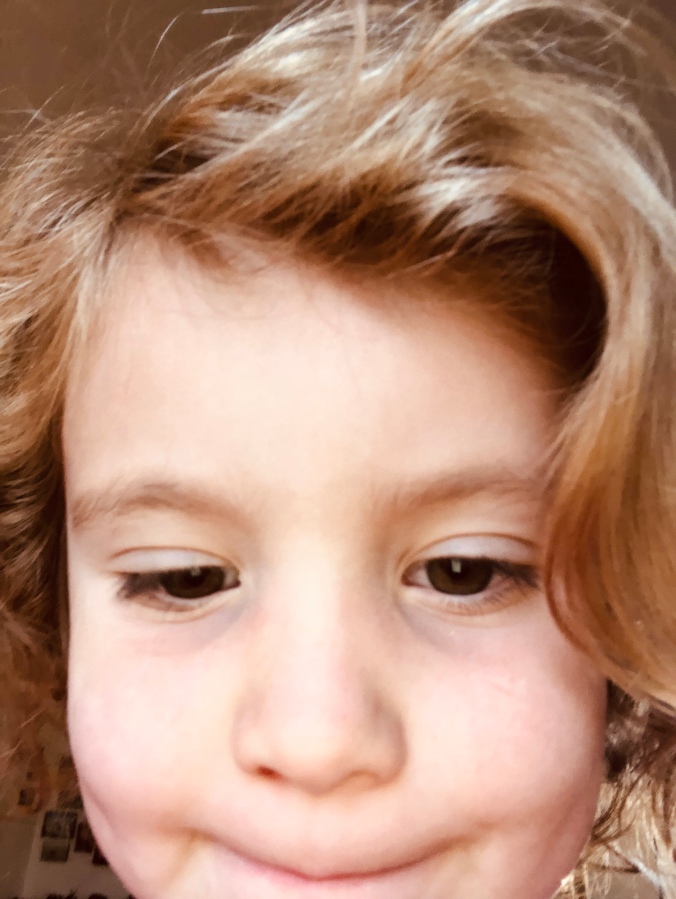 If only they knew what being an adult is really like…they wouldn’t resist nap time nearly so much.