Winter is my least favorite ranching season.  The weather is generally wet, cold, blustery, and rather than sipping hot cocoa, we have to be out in the inclement weather feeding cows or pulling calves or mending fence or breaking ice.  I use the term “we” very loosely here.  This year, the traditional winter months of November, December and January were actually fairly pleasant and mild.  We were able to keep our cows on cornstalks through much of January and bring them home in dry conditions.  This was the first time my little family has gathered a field of cows all by ourselves.  Becca rode with Mr. Rancher.  As he is the most experienced rider, he had to do most of the cattle-chasing, which means he trotted or loped more than the rest of us.  Trotting and loping are not comfortable for passenger riders and Mr. Rancher held Miss Becca around her waist and off to the side most of the time to keep her from being slammed into the saddle horn with each footfall of the horse.

Miss Henley and I took it nice and easy, gingerly picking our way through the trampled ground and over the deep pivot tracks.  Lucy, Henley’s horse, kept jumping over the pivot tracks which made Henley scream in terror.  She finally was scared and exasperated enough after four or five jumps that she choked up on her reins and held Lucy in check until we made it out of the field. 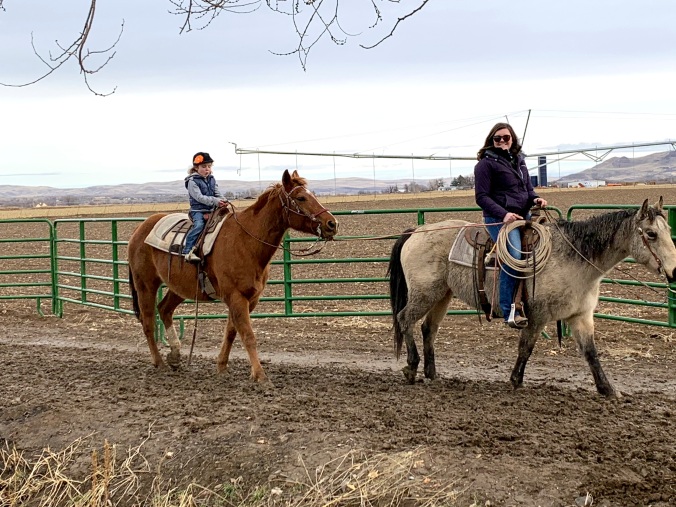 She did very well for her first time really gathering cows.

Once the cows were home, the daily grind of feeding began.  I don’t have to feed much…I always seem to have an excuse like a baby or a job or something that gets me out of the frigid early mornings.  But sometimes, I pack up the craziness that is my life and tag along to drive the pick-up or tractor for Mr. Rancher.  And then I take pictures of the cute girls while he throws hay off the wagon.

My girls couldn’t wait to see the cows in the morning.  There were more than a few mornings this year when they went feeding with Dad and left me home to work on grading or lesson preparations.

On this day, Henley wanted to find “her” cow, Agnes.  She was brave enough to walk through the herd only while holding Daddy’s hand.

This one is my favorite. 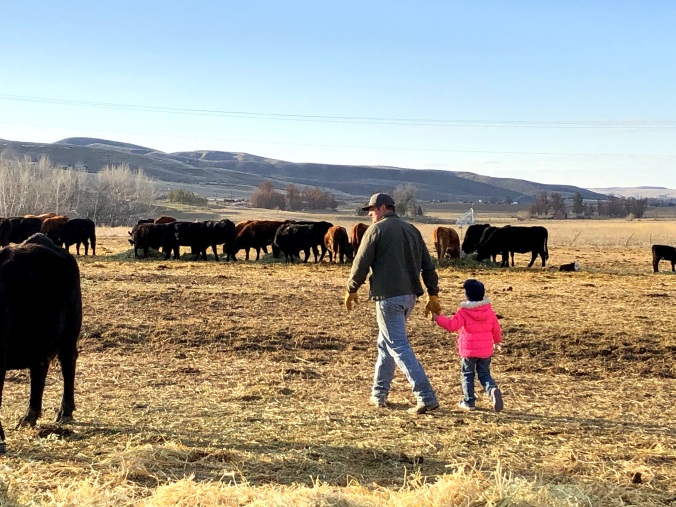 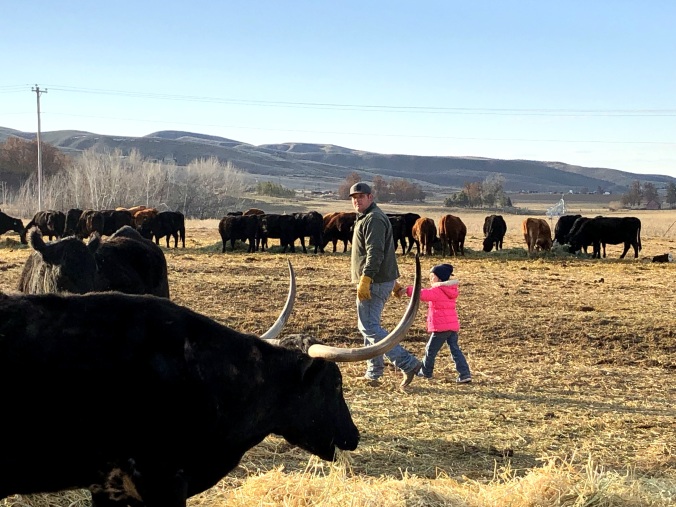 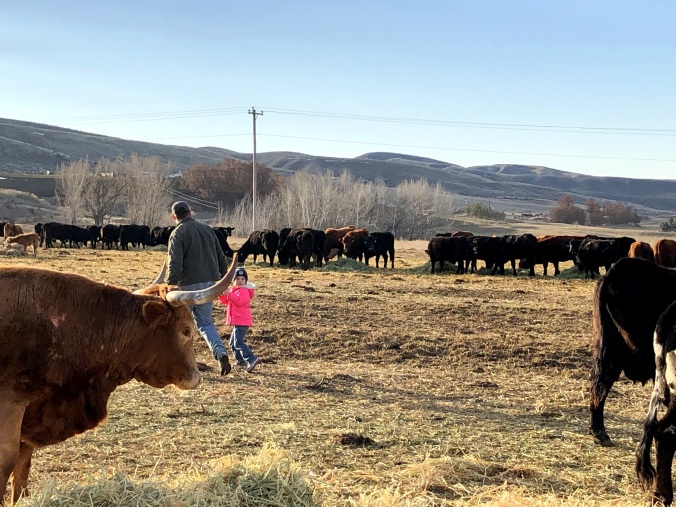 Alas, Agnes has been with the other cows long enough that she wouldn’t let Henley get close enough for physical contact.  Poor girl had to settle for saying “hi” instead. 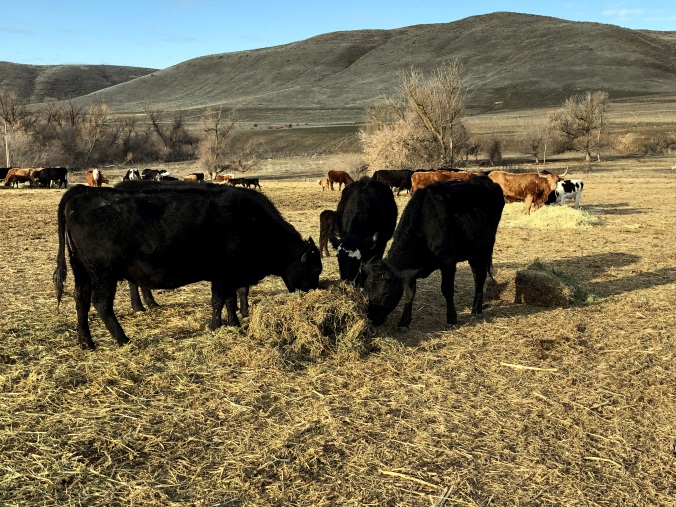 This view has always been the best part of our winter ranching operation.  Sadly, we won’t see it next year as we are moving to a new feed ground.  I had to get just a few last-year-pictures. 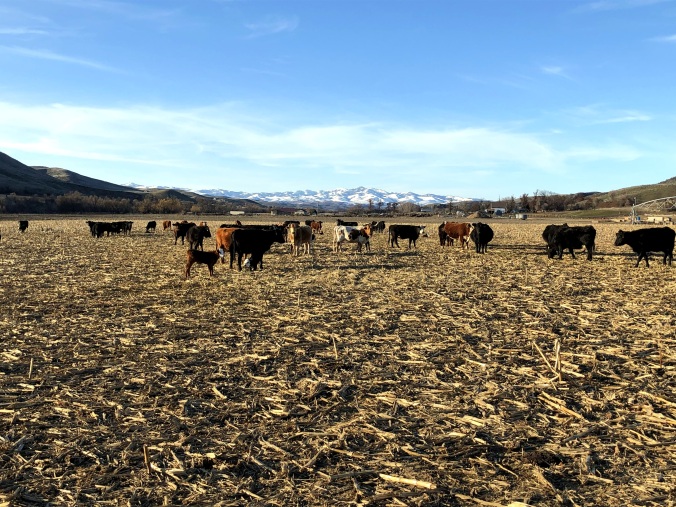 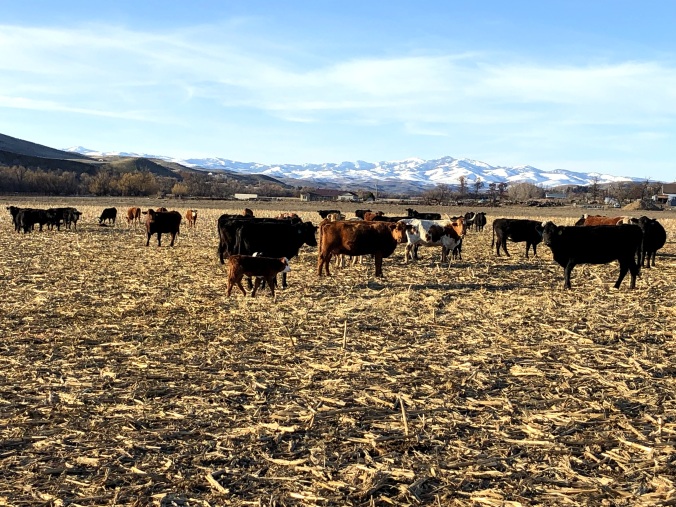 And the calves.  Oh the baby calves.  They are precious and sweet and cute and fast little buggers to catch with an eartag gun in hand.

And the pregnant mamas are so…well…so round. 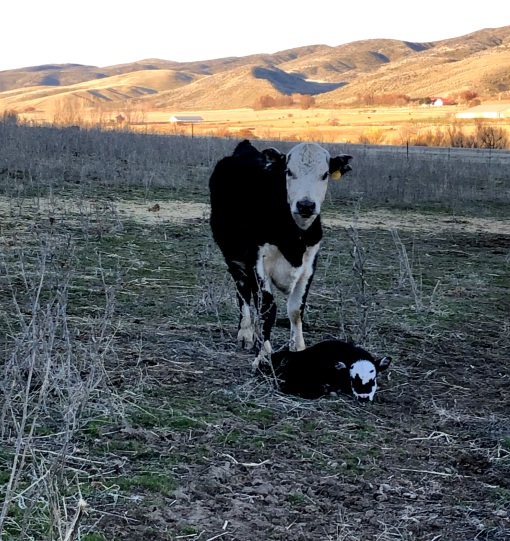 With the adorable calves comes the responsibility to tag each one, for ease of identifying who belongs to whom.

Here is photographic evidence that Mr. Rancher, the well-known pushy and demanding boss, drops the eartag gun too.  Just like the rest of us peons he has to work with. 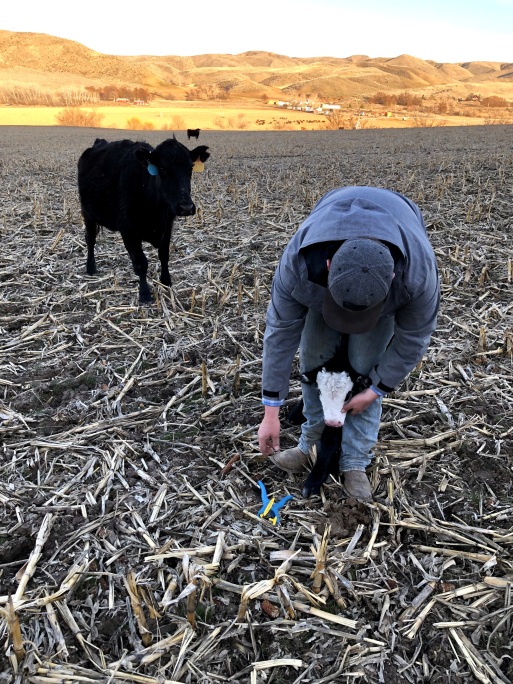 He still gets the job done faster than anyone else though.  Our friend put it well last week, “he’s one of those people who is just good at anything physical the first time around, what a jerk wad.”  This isn’t Mr. Rancher’s first round of tagging calves, but he is naturally gifted when it comes to any sort of physically demanding work or play.

I am not; therefore, I sit on the four-wheeler and do not attempt to catch the skittish calves or pierce their ears while their bovine mother is snorting and stamping the ground not five feet behind me.

I love this picture series.  It shows the true nature of calves.  Curious and inquisitive at first. 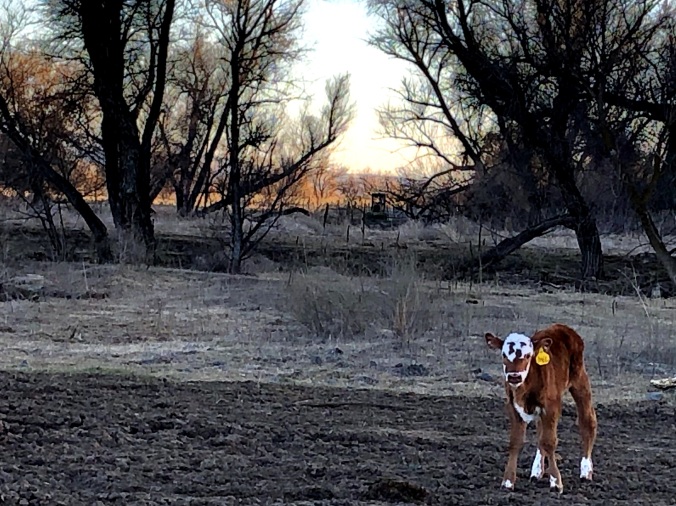 Ehh…a little unsure as the humans get closer. 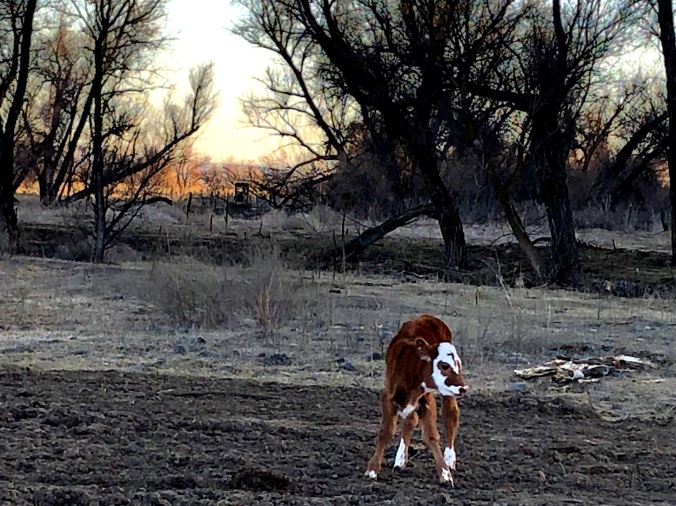 Safe back with mama.

Whew.  I wasn’t scared.  Just a tad wary of people. 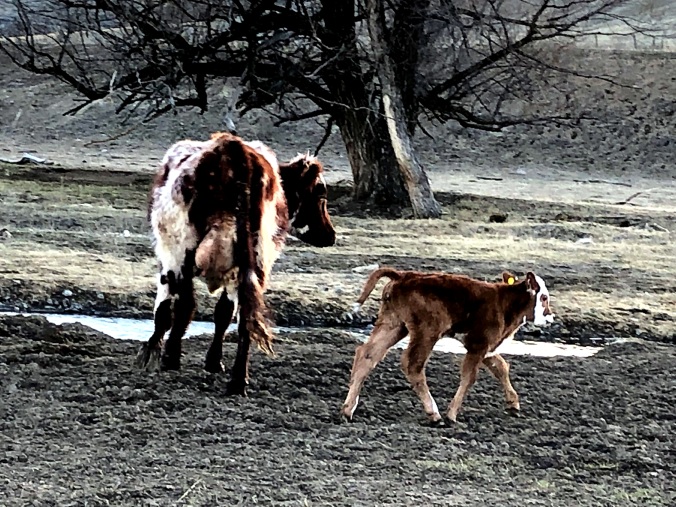 One thought on “Winter/Springtime Ranching”