Look what I found in my bed.

Two pajama-clad bundles of cuteness!  They love snuggling in mine or Henley’s bed for the first few minutes of every day.

Below, this is not where I left my baby.  And Henley was with me so I know she didn’t move her.  I’d also like to note that this picture was taken several weeks ago (as are all of these photos) and she can now scoot and wiggle even farther away from where she is placed by an adult.  We have a mover on our hands and we’re not sure if we’re prepared for that yet.

We bought new couches a while ago, Becca christened them by taking a sweet power nap,  totally unexpectedly while Henley and I were reading right next to her.  I’ve been much more structured with Becca’s sleep schedule than Henley’s (perhaps that is why Henley is such a horrid sleeper? I realize now that I had absolutely no clue what I was doing when Henley was a baby!) and she really doesn’t do power or sporadic naps like this.  Everyone needs a good nap on the couch every once in a while I guess!

As shocked as I was by Becca’s impromptu nap, I was even more aghast at this!

I’m happy to report that the thumb-sucking was short-lived and she is back to preferring her binky to her fingers.  I realize the binky habit is hard to break to, but at least the binky can be cut or thrown away (obviously unlike her thumb) if we get desperate.

Along with our new couches, Henley got some new clothes including this Elsa nightgown.  Need I say that she loves it?  Also, she loves the live action Beauty and the Beast.  As do I.  We may or may not have watched it every day for seven days straight and also listened to the soundtrack in the car for those same seven days…Henley has taken to singing “Madame Gaston, can’t you just see it?  Madame Gaston, his little wife. UGH!” with a towel on her head that she whips off just like Belle. 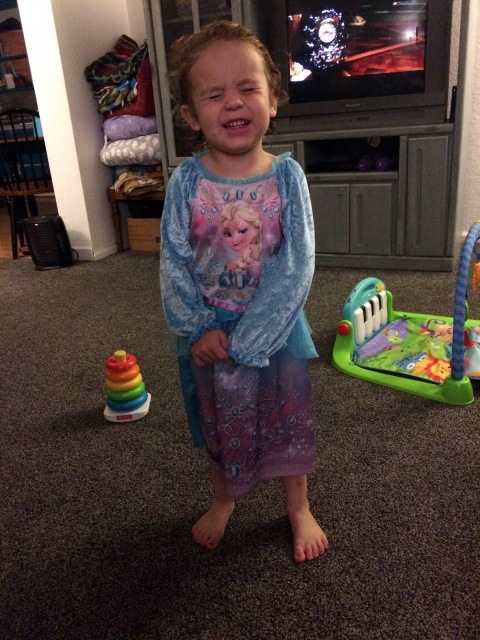 Finally, this girl still loves her baths.  She and Henley get one every, single night regardless of how late we may get home from a party.  Henley will go to bed fine without a bath but Becca will not.  I tried just putting her to bed one night when we got home late from a church meeting and she woke up an hour later completely distraught.  I finally put her in the tub and she settle right down for a nice splash then went peacefully back to sleep in a clean diaper and jammies like she hadn’t just screamed for 45 minutes straight.

I don’t know if all children are this way, but mine are opinionated and obstinate and have wills of iron.