Seems like all we do anymore is brand calves!  Two weekends ago we spent the night at the Middle Fork of the Weiser River so that we could get up at 5:00 AM to gather our friend Darren’s cows.  That’s right 5:00 AM.  We had a blast hanging out around the fire and playing in the river before passing out in our tiny tent.  Mr. Rancher swears we put our tent on a slope and he didn’t sleep very well.  He was up by 3:30 and I was up by 4:00, because 5:00 just isn’t early enough!  Henley woke up a couple hours later and was not a happy camper.  She was cold and tired and did not want to get on a horse and go gather cows so early  in the morning.  She was a trooper though and we were in the saddle by 6:00.  I’m giving you so many times to try and convey how much I hate early mornings!

Before Mr. Rancher and I decided to take the Little Miss on a camping trip we talked a lot about how riding would be with a toddler.  I was a little worried about how comfortable Henley would be, how we could pack enough water and snacks for her, and how squirmy she would be.  We briefly talked about the Middle Fork and how steep/rocky the terrain would be.  Having never ridden there myself I completely trusted Ty’s judgment on how safe the ride would be.  He assured me that the Middle Fork is not too steep and that we would be just fine and perfectly safe.  So we went!

Once we were riding, I was not so sure about Ty’s judgment anymore.  The Middle Fork is not nearly as steep as the mountains around the Snake River where our cows used to be, but it is much rockier.  My stomach was in a permanent tangle of knots as our horses picked their way over rocks all the way to the top of the hill.  Every single time my horse’s hoof scratched a rock or stumbled I swear I had to swallow my heart back to its proper place.  Henley rode with Ty most of the way up then came with me to push cows off the hill and down towards the road.  We followed a four-wheeler road until we met a group of cowboys (who totally upset the cows we had moving quite nicely down the hill) and let them herd the cows while we continued to pick our way back to the road.

Not five minutes after we were alone again I heard the quiet, distinct rattle of a rattlesnake.  I looked down and just in front of us, halfway under a sage brush was a huge rattlesnake!  My first thought was  “what do I do?!?!?!?!!!” and my second was “don’t be stupid, just keep riding!”  There was no way I would have been able to dismount and kill the snake with Henley in tow, even without her I probably couldn’t have killed it.  So against all of Ty’s insistence that when one sees a rattlesnake one must kill it immediately, I jerked Max’s head to the right, and away we rode from any crazy thoughts of trying to kill poisonous serpents.

One subtle smile once we made it back to the corrals and were off the horse.  Henley loved chasing cows and shooing them along, but she really didn’t enjoy the bumpy ride on the saddle horn.  We spent the rest of the very hot day sorting and loading cows, playing in the river, and waiting for the trucks to shuttle cows from the Middle Fork to New Meadows.  It was late evening by the time the cows were all moved and ready to be branded and Henley was absolutely pooped.  She and I headed home to bed while the other cowboys took care of branding.

A week later we all went up to New Meadows to finish up a fifty or so calves.  It is so absolutely beautiful up there.  The grass is green and tall and there are just enough pine trees to add diversity to the landscape but not enough to add an element of claustrophobia.  Apparently the pretty grass made roping hard though, I didn’t mind it though and I especially enjoyed a branding free of dirt and dust.

Henley acted the part of “management” while the big people worked.

I love pictures of everyone involved in working calves.  Especially when my cowboy is one of the ropers.

Not sure what she found so interesting, it was empty except for a layer of manure.

This is one of the only roping pictures I’ve been able to get of Ty, and it’s focused on the cows in the foreground.  Go figure. 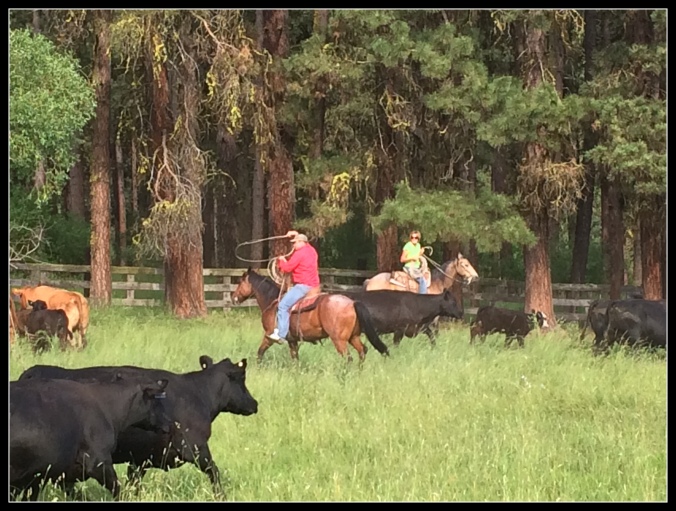 It’s been a very few weeks of branding cows for many of our neighbors and friends.  Maybe now that all the calves have been worked–hopefully–and first cutting of hay is over we’ll be able to relax a bit.