Just when I think I’ve mastered the art of being a rancher’s wife, some heifer needs a medical procedure of sorts and I have to help.

Last week, Ty noticed one of our first-calf heifers off her feed and decided to bring her in to her own pen where we could monitor her more closely.  The vet told Ty on the phone that her lack of appetite could be from any number of things including the discomfort of pregnancy.  We like our local vets, but this advice was less than helpful.  After a few days the heifer started eating again and seemed to be doing well.  Until yesterday.

Mr. Rancher and Tanner noticed she was laying down when they went to feed yesterday morning, and she didn’t get up to eat or drink.  They kept an eye on her all day but she still wouldn’t move even with the help of a cow-hip-lifter-thingy.  Ty called me to fill me in on her condition and asked for my opinion of what we should do.  I love that even though he is well aware of my pitiful knowledge of livestock, he still asks for advice concerning the ranch.  I told him to do whatever he thinks is best and that I was sorry she wasn’t doing better.  Another example of less than helpful advice.  Mr. Rancher called me back a little later to explain our two options.  Option one: we wait for her to die on her own and lose both the heifer and her calf.  Option two: we put her down ourselves, deliver the calf c-section, and possibly save the calf.  Both options were equally discouraging and frustrating.  Ty decided to give her a little more time before doing anything drastic.

When we made it out to feed today, she was still down and her eyes were starting to sink back into her head.  Ty told me we needed to put her out of her misery and try to get her calf out alive.  I had an appointment with a friend for a Mary Kay consultation (Yay!) but promised to help with the surgery when I got back.  We finished feeding, I went and played with make-up while Ty took Henley home for a snack and a nap, and we left the heifer with food and water nearby just in case, by some miracle, she picked back up.

A couple hours later, after dropping Henley off with Aunt Lexcie, we made it back to our troublesome heifer.  She still hadn’t touched her feed or water and was starting to cough faint, death-is-near coughs.  We made the tough and repulsive decision to shoot her and deliver her calf c-section.  Ty got the chains ready to pull the calf, pulled out his knife and checked to make sure it was sharp, and I walked away and covered my ears.

After the shot was fired, Ty went into super-speed to get the calf out as soon as possible.  I stood close by, ready to grab the knife or pull a leg or put the chains on.  Several eternal minutes later we had the slimy calf out of its dead mother and were shaking it, wildly and upside down trying to get it breathing.  We managed to get the chain around its hind legs hoisted onto the tractor forks which made our shaking efforts a bit easier.  Once we had the calf breathing we grabbed some towels and went to work drying it off.  The little bull calf was still struggling to really get breathing on his own so Mr. Rancher gave him mouth-to-mouth.  Watching my husband make the split-second decision to go mouth-to-mouth with a newborn calf without any amount of hesitation or disgust showed me just how committed and passionate he is about caring for our livestock.

Once little bull was dry, we loaded him in the pick-up and drove home.  We set up a cardboard box, lined with old carpet, in our mud room.  Little bull is sleeping there tonight.  He drank some colostrum Lexcie saved from her dairy cows last year and his breathing has steadied from this afternoon.  It’ll be a miracle if he survives but we are hopeful.

Mr. Bo is utterly offended and disgusted that a calf has taken over his room of the house.  Henley likes peeking over the edge of the box to look at the “moo.”  I’m tired and a little bit emotional about what I witnessed today.  Mr. Rancher is very practical about the whole thing and goes to the mud room every so often to rub little bull’s head and tell him how important it is that he lives.

Some of you reading may wonder why we didn’t just take the heifer in to the vet and have the calf surgically birthed with the mother still living.  Quite simply, she most likely would’ve died anyway.  Even with the expertise and qualifications of the wonderful vets in our area, the heifer had been sick and under stress for several days and going through such a major surgery was not likely to make her better. When you have over a hundred head of cattle, you learn to do things yourself and you learn to make tough decisions on the fly.  I can’t believe it but today I assisted in a bovine Cesarean-section!

Not on my bucket list, but definitely an experience to remember. 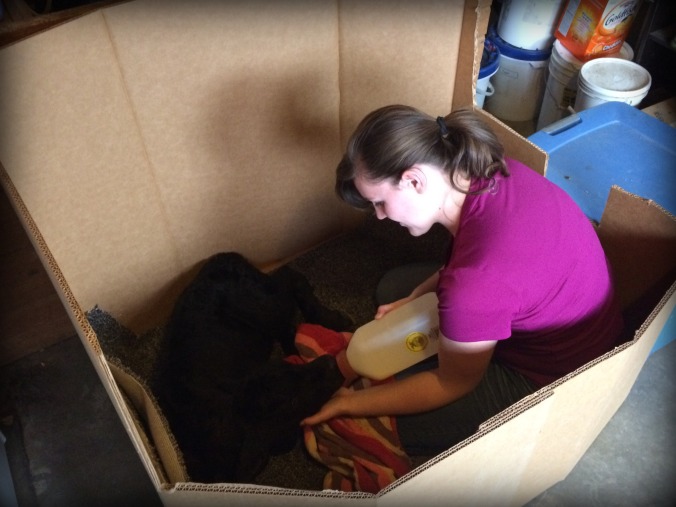 2 thoughts on “C-sections and Little Bulls”