I stumbled on this picture while backing up some of my photos from last year.  Side note: I take waaaaaaaaaaaaay too many pictures!  There really is no reasonable explanation for hundreds of snapshots of the same dandelion in my yard, I simply have a  trigger-happy finger when it comes to experimenting with my camera.

Anyways…I found this shot which was taken last Memorial Day at the Crawford’s branding.  This is, obviously, Mr. Rancher and he is riding our horse Si. 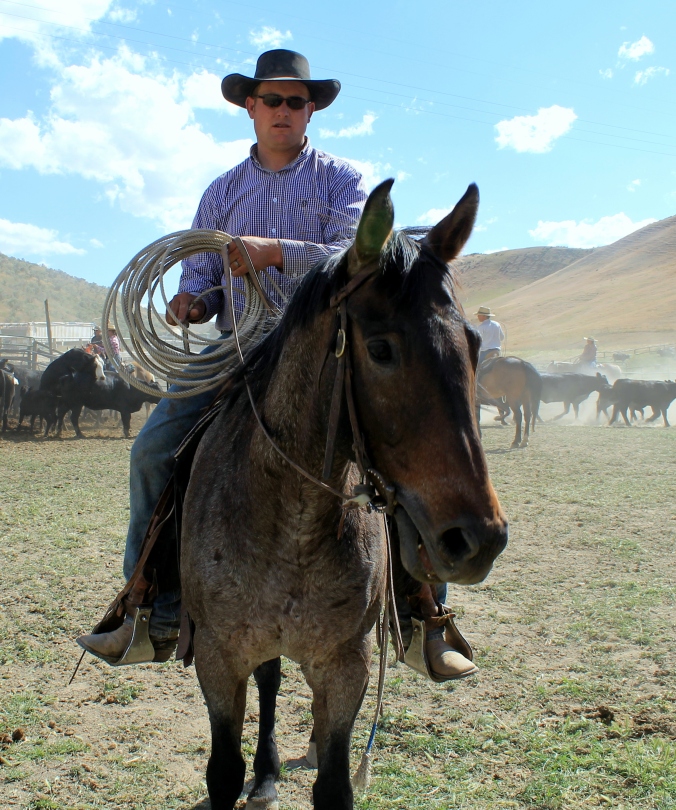 When we first bought Si, about a year ago, he was very skittish and not well-behaved about getting caught, saddled, loaded in the trailer, or being ridden.  Ty worked him pretty hard this last summer and fall and he is turning into quite the good little horse.  Except he still has an attitude problem about getting caught and saddled.  I can’t say that I totally fault him for that–I don’t like getting up and getting ready for work either.  But horses are supposed to be more obedient and less difficult about that sort of thing.

Even though I’ve never ridden Si (and probably won’t ride him for several more years) I like him.  He has the cutest little head!  More than that though, he’s the first horse Ty and I have bought as a married couple and the first horse I have bought in my whole life.  I honestly never thought I would purchase a horse, especially not a horse that was being sold because he was too much for the owner to handle.  Buying and training horses is just one small piece of the territory that goes with being a rancher’s wife, and for now, I’m quite content writing the check and taking pictures of the horse and leaving the training part up to my cowboy.

One thought on “Si the Horse”